GPS is no longer limited to GPS devices as just about every smartphone has it. Gone are the days of smartphone manufacturers boasting that GPS is included because even the cheapest entry-level devices have it. Although the GPS hardware capabilities are weak, there are a lot of smartphone applications that can really put the GPS device to good use. But what if you need a GPS device for your car? If you are lucky, you might find a dashboard mount for your phone or tablet but you also have to hope that the smartphone stays accurate and that the map information is sufficient for whatever trip you are planning. This is where smartphones start to show their weaknesses. Fortunately, today’s automotive GPS devices are far more advanced and a good number of these are still affordable like the TomTom VIA 1435TM. 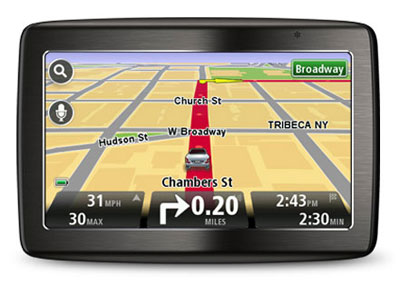 Most 4.3-inch GPS devices look bland and boring but the TomTom VIA 1435TM is a 4.3-inch that looks more elegant and even more durable. With a brushed-aluminum finish on the bezel, the VIA 1435TM has that premium feel and looks pretty thin. There is also an EasyPort mount on the back so you don’t have to attach a mounting accessory for car installation. This is a refreshing design that TomTom has every right to boast about.

GPS devices are supposed to be easy to use but the TomTom VIA 1435TM really makes things dead simple. The main menu has everything you need on a single screen so you can either touch one of the large icons to do the most common tasks or tap an icon on the toolbar to change options or get some help. Like all modern GPS devices, the TomTom VIA 1435TM is made with touch in mind but voice operation serves as a second way to operate this device thanks to the built-in voice recognition engine.

The navigating with the TomTom VIA 1435TM is pretty pleasant. It makes use of TomTom’s iconic features like the IQ Routes technology which continues to improve in delivering accurate route statistics thanks to the millions of other people using TomTom devices. Real-time traffic updates are in effect at all times so you can easily slip past a heavy traffic situation by letting the device plan an alternate route. This feature is free and it never expires. Plus, you can stay focused on the road by just listening to the exact street names that the device will say when a turn must be made.

When driving in a highway, the screen could prove to be helpful because it shows a 3D view of the highway along with an indicator highlighting the lane you must be in so you can make the exit indicated on your planned route. This is called the Advanced Lane Guidance feature and it could be useful if you are not familiar with the junction or intersection you are in.

The TomTom VIA 1435TM is pretty rich when it comes to map data with more than 7 million points of interest already present when you first turn the device on. The added benefit of lifetime map updates make things even better so you get retrieve any major map changes that may occur in the years to come.

The interface and impressive feature list should put any smartphone to shame. But it doesn’t render the smartphone useless in the car because the Bluetooth capability allows a pairing to be made. Once paired, the GPS device instantly becomes a hands-free smartphone where you can accept incoming calls and have a conversation using the built-in microphone while driving safely.

Bluetooth is one of the most surprising features of the TomTom VIA 1435TM . The only thing that is even more surprising is the price ($180). Some stores may even sell the TomTom VIA 1435TM for cheaper. Although the 4.3-inch display isn’t for everyone, the voice control and lifetime map and traffic features are enough to conclude that GPS devices are not only still relevant but are great solutions for drivers that don’t want to spend so much. More importantly, maps can be downloaded 4 times a year while traffic monitoring will continue to run as long as it works. That alone is a great deal and there are no serious downsides for the price you pay.